You know that if your puppy isn’t by your side, you’ll find them in one reliable spot, in the kitchen by their water bowl. You’re confounded about why your dog is always digging at the bowl. What’s going on here?

Here are some reasons your puppy is digging at the water bowl:

It can be more than aggravating when your dog constantly spills their water all over the kitchen. Spilled water is a tripping hazard and could potentially cause electrical damage depending on what’s in the vicinity. This guide will further explain why your dog behaves this way and how to stop it.

7 Reasons Your Puppy Keeps Digging at the Water Bowl

1. They See Their Reflection

The first reason your puppy might be so enamored with its water bowl is that it’s metallic. When your dog looks at the bowl, they can see themselves! Or is it another canine?

If you’ve ever held your dog up to the mirror and they panic thinking there’s another animal in the room, that could be precisely what your puppy thinks when they glimpse into their metal bowl.

They stay by their water bowl because they feel like they need to investigate or perhaps scare off this invasive dog.

To determine if the water dish material is what’s making your puppy so obsessive about the water bowl, wrap a towel or even some tape around the bowl for an afternoon. Or swap it for another bowl.

Has your puppy calmed down and lost interest in the water bowl? That’s because their mysterious double is gone.

It’s not always fun and games when your puppy becomes attached to its water bowl. A much more serious cause is that your puppy could be displaying compulsive behavior.

Compulsiveness in dogs often manifests by them chewing, licking, or sucking on items, drinking a lot of water (which is known as polydipsia), freezing up and staring at nothing, chasing nothing, circling, and pacing.

The behavior could be a manifestation of your puppy’s stress or your new dog could be lacking attention or mental and physical stimulation.

3. To Get Your Attention

We talk about this on the blog all the time, as it’s an unfortunate part of dog behavior.

Your dog knows how to push your buttons. Every time they roll a ball or throw their toy at you, you don’t react (probably because you’re busy juggling five other things). When your dog misbehaves, that makes you stop in your tracks and address them.

Your dog just wants your attention, and if being naughty is how they have to get it, then so be it. Your dog will do more of the things you don’t like to get your time. That can include splishing and splashing around their water bowl.

It’s also possible you thought it was really cute the first time your puppy dug at the water bowl. Maybe you gave them lots of attention and praise. In this case, it’s a learned behavior and they’re repeating it to get your attention.

When your puppy digs at the water bowl, it could also be something they’re doing out of boredom.

As mentioned above, dogs need both physical and mental stimulation to stay happy and healthy. If they get one but not the other, they can become impulsive and destructive.

It starts with the water bowl and then becomes the kids’ toys, the shoes, and the furniture.

5. To Move the Water in the Bowl

Have you noticed that your puppy often digs at their water bowl just enough to get the water moving, and then they’re happy to drink from the bowl?

If you see this happen several times, it could be that your puppy is trying to move the water intentionally.

Why would they do that?

Between cats and dogs, dogs have a stronger urge to drink moving water, so your puppy is just doing what feels natural to them.

6. They See Something in the Dish

If you only notice that your puppy digs at their water bowl on occasion, then it could be that they have a very viable reason for it.

They could see something in the bowl. Perhaps that something is a floating food particle they’re trying to fish out. It could just be a reflection.

In some cases, it might not be anything. After all, a dog only has 20/75 vision. They see the best in the dark, so your puppy could very well perceive something in the bowl that’s not actually there.

Perhaps it’s a good idea to dump their bowl and refill it.

Is your puppy splashing about in their water bowl on a hot summer day? Although this can get on your last nerve, your puppy is covering themselves in water rather than drinking it because they’re hot.

Getting wet is a great way to cool off, and it’s not like your puppy has access to another source of water more convenient than their dog bowl!

How to Stop Your Puppy from Digging at the Water Bowl

Now that you have a better understanding of why your puppy is digging at their water bowl so fervently, it’s time to nip this behavior in the bud. Here are some suggestions that will help you do just that.

Switch from a Metal Bowl to a Non-Reflective Surface

If you suspect that your puppy’s issue is with seeing themselves in their reflective water bowl, then the fix is extremely simple. Just buy your puppy a bowl made of non-reflective material.

They won’t be able to glimpse themselves (or what they perceive as a strange dog) in the bowl anymore, so your puppy should cease their digging and splashing.

Buy Them a Moving Water Fountain

You’ll recall that dogs have a deep-seated instinct to drink from moving sources of water. A stationary water dish will never compare, so why not upgrade?

The PetSafe Drinkwell water fountain for medium-sized dogs is sure to keep your puppy from splashing water here, there, and everywhere. 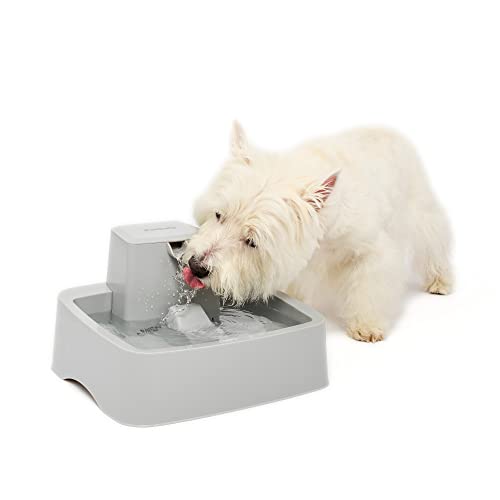 The fountain includes a water filter and a pump. Once you put all the pieces into place, just fill the fountain with water, plug it in, and your puppy will have a nonstop source of moving water to sip from.

At their age, a puppy should consume a half cup of water at least every two hours. If your puppy isn’t gulping down that much water, the dog could become dehydrated.

Keep Your Dog Active and Stimulated

To reduce boredom and possibly compulsiveness in your puppy, do be sure you’re physically and mentally stimulating them.

Puppies don’t need as much exercise as a fully-grown dog, of course. For however many months old your puppy is, add five minutes to their exercise regimen.

For example, a puppy that’s three months old can exercise and play for 15 minutes tops.

To keep your puppy mentally stimulated as well as physically, try to treat toys or even walk a new route.

Fill the Bowl Throughout the Day

To keep your puppy from splashing in the water because they’re warm, you should fill the bowl with cold water and ice. Check the thermostats in your home as well and consider turning on the air conditioning for your pup.

If your puppy just won’t stop digging, then it could be compulsive behavior or something more at play. You should take your puppy to the vet for an evaluation just to be on the safe side.

A puppy who’s digging at the water bowl can leave you constantly cleaning up water spills in the kitchen.

Your dog is trying to tell you something with their behavior, whether it’s that they’re stressed, bored, hot, or that they want your attention.

Once you address the root cause of your puppy’s behavior, the only time they’ll go to their water bowl is to drink!

And we are starting with one of our very favorites, the cavapoo, also known as cavoodle and cavadoodle.

This site is owned and operated by AJH Trade Group. AJH Trade Group is a participant in the Amazon Services LLC Associates Program. As an Amazon Associate we earn from qualifying purchases.

AJH Trade Group also participate in other affiliate programs. If you use our referring links, it costs you nothing extra. We may earn a small commission.